Though I would never categorize myself as a “gamer”, I love a mentally-challenging video game when I can justify the time.

Ok, I can never actually justify the time, so I just flat-out lie to myself that I need the escape.

Recently, I just completed the original Portal game for the second time in a few years.  I returned to this witty, single-player “puzzle-platform” game to improve on my attempts to outwit the sadistic, but funny, central computer (GlaDOS) who tries to convince you–through false praise and promises of cake at the 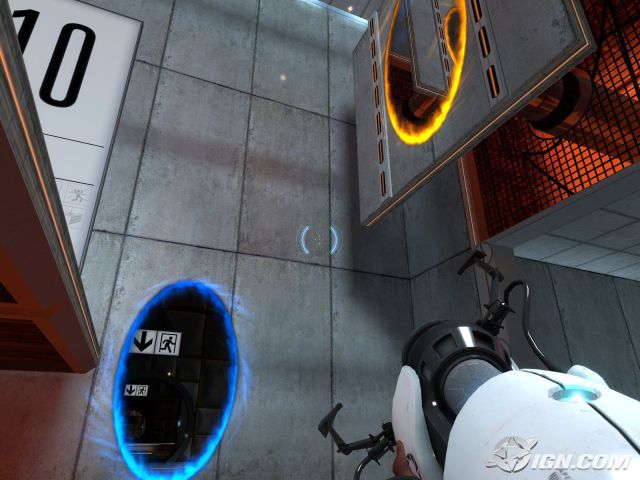 end–that you are in a training simulation.  Believable, until the sentries start firing live rounds and GlaDOS herself (itself?) tries to off you using moving platforms, a large blast furnace, and a dead end.

Using a “portal gun”, you recreate paths through and around various obstacles by creating two “portals”–in essence, an “in” and an “out” which follow the laws of gravity and physics.  By walking and jumping and throwing things–and occasionally having things shoot at themselves–through these portals, you work your way through challenges that often require you to try something numerous times (and die trying each time) until you get it right.

With this fresh in mind, Mary Beth Hertz’s recent blog post on a video game model for classroom instruction resonated with me.  Essentially, she highlights three characteristics of game play that should become principles of instructional design.

Mistakes as Part of Mastery: Anyone who has ever played a video game understands this.  In short, you get to make truckloads of mistakes while gaming.  My ten-year-old is forever lamenting, while playing his DS, “Man, I keep dying”.  And my response, of course, is “keep trying.”

Immediate Feedback: The results of all those do-overs, and all the minor adjustments we make in between, quickly reveal themselves to be successful or not.  Either it works, or I die.

Manageable Goals: Most games are “leveled”, giving the gamer a sense of completion periodically and making the “sub-goals” within grasp and within sight.  This is the reason we talk about “project management” and chunk our students’ assignments into steps or parts or phases.

In a game like Portal, the overt motivation might be the completing of a level or a step.  But the real motivation is the satisfaction of doing it well.  Or better. This is the charm of “achievements” in many of today’s video games.

In Portal, for example, I can complete a level, but I can also earn an achievement if I can complete it using only seven portals, or making it out in under three minutes.  Beatles’ Rock Band is another example, offering would-be rockers an award for playing all songs in the same concert at the “five star” level, or playing Paul’s bass line left-handed in a satisfactory manner.  Even silly little app games for the iPhone have these.

So why not build these into our class?  Let’s do more than tell the students that “it’s about the learning, not the grade”.

For example: For a writing assignment, they could earn the standard grade to satisfy the traditional requirement, but then they could “unlock” achievements: revising a paragraph to exactly half (or twice) its original length, or avoiding the use of linking verbs for at least ten sentences straight.

This is not extra credit because it does not add to their grade.  Instead, they earn these achievements for their own satisfaction.  As teachers, we don’t even have to promote them, like stickers on a public chart.  Students can choose to “post” them for all to see (have you seen a kid’s Facebook page lately?) or they can choose to quietly revel in the satisfaction of what they have accomplished.

Yet, we continue to hold out, carrot-like, the Grade as the ultimate prize.  In Portal, the initially-seductive voice of GlaDOS continually reminds you that, if you are successful and complete all the tests, there will be cake.  Yet, after her unsuccessful (eventually!) murder attempt, as you are slinking through the back rooms of the training center, others before you have repeatedly scrawled onto the walls: “The cake is a lie.

“What cake do we offer?  Promises that “you’ll need this someday”? A high GPA as a ticket to admission?  Do we make up extrinsic motivations because we can’t verbalize the intrinsic ones? I agree that all of us need a dose of extrinsic motivation, but if we aren’t encouraging self-discovery and providing opportunity for “achievements” along the way, winning the game just won’t cut it any more.

Next: How to Personalize Learning (Without Remodeling Your School)